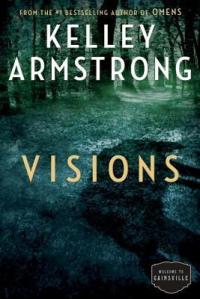 Gabriel’s preternatural calm cracked then, not enough for the detective to notice, just a hairline fracture. I could see the panic in his eyes, as he struggled to give the gracious response, to say yes, that would be fine, thank you very much (Ch. 35, p. 228).

Before getting into this review, I have to admit that as I read this book I started to remember more of what happened in the series. This meant that I wasn’t as surprised during this novel as I was while reading Omens. However, as I reached the end of Visions I realized that I haven’t read past this book in the series. While I’ve picked up every book in this series right when it was published, it seems as if I didn’t actually read them. A shame, really, since Armstrong is one of my favourite writers (I promise I’ll stop saying that so often). This means that starting with Deceptions I’ll be reading this series with fresh eyes.

Keeping that in mind, I love the way that mythos plays a role in this world. Armstrong has done a beautiful job at slipping in mentions of past experiences and what Olivia refers to as fairy tales. It’s done in a way that shows the reader slightly more information than Olivia is privy to, allowing the reader to make logical leaps before everything is spelled out in the story. This also means that the reader is given many clues to piece together the meat of the plot before the characters.

While there remains a section of this story that deals with the Larsens and their alleged crimes, this novel does not focus on it. Of course, Omens didn’t always put a huge focus on this either but it did focus more on Pamela and Todd than Visions. If this is the part of the story that you were looking forward to reading more about, I can only guess that it comes up more in the rest of the series than it did this novel. Visions leaves that whole part of the story open ended, instead focusing on the preternatural aspects of Cainsville and its inhabitants.

If you’ve gone into this series looking forward to learning more about the preternatural side of things, of learning the Welsh mythos, than I think you’ll be pleased with this read. Visions focuses heavily on this side of Cainsville and the events happening around Olivia, trying to fill in some of the clues that the reader is left with at the end of Omens.

On top of my usual recommendations of anyone looking for a good fantasy read, I would recommend this series to anyone who’s a fan of Armstrong’s writing. To me, it’s got a great mix of feelings from her Rockton novels and Otherworld novels. We get the mystery and the supernatural thrown into one wonderful story.

Of course, if you’re just experiencing Armstrong’s writing for the first time, I would still recommend this series to you. While it does have minor mature content, I don’t think that it’s so over the top as to scare people away from the mystery and intrigue of the read. If you’re looking for a good read about someone who’s of “New Adult” age – mid 20s – and actually acts their age, this is a fantastic read to pick up. As long as you’re interested in the fantastical, this series will entertain you.

I love the inherited memories that Olivia got to see, even if it was a freaky experience for her. While it must have been terrifying to see a banshee in a memory, and to wake up from another memory with an exceptionally high fever that knocked you out for more than a day, I find it really interesting that she got to experience the fae world. As well, it pulled into play the history of what’s going on around Olivia, even if she doesn’t yet know it.

While I have no solid evidence to support this (yet), I believe that all of the hints lead towards Ricky being Arawn and Gabriel being Gwynn. After all, why else would everyone else – Tristan, the elders, the Huntsman, etc. – be hinting that history was repeating itself with the three of them? The Huntsman is convinced that Ricky is going to be their champion to woo Olivia and the Cainsville elders seem to be pushing Gabriel to be theirs – even if they won’t admit it. The fact that Ricky seemed to have a dream about something he felt he needed to tell Olivia just goes to show that he was also having inherited memories. I don’t know what role Tristan is going to play in this situation – yet – but I can’t wait to find out.

The inherited memories were also a great way to introduce Olivia’s tangible connection to Cainsville to her. While the reader knows by now that Olivia is connected to Cainsville, Olivia herself had no idea that her mother’s family was originally from here. Having her experience these memories in her family home was a really interesting tool to use. The fact that this is the very house that Rose went to as a kid to visit the lady she knew could read omens tied it all together nicely. Since the powers are inherited, it must feel great for Olivia to get some vindication that Pamela is lying to her and her family actually had abilities. No matter how much Olivia already suspected that her mother was holding back from her, for someone who’d lived her life as logic based as Olivia had, this tangible proof must have been refreshing.

On a completely different note, it was fascinating to see the way in which Olivia started to handle the strange things going on in her life. Though she wasn’t sure that she could trust Gabriel from time to time – since he seemed to keep betraying her trust without meaning to – she always went to him first. Even when dating Ricky, Olivia knew that Gabriel would always be there to protect her.

It hurt my heart a little bit to see the way that Olivia made Gabriel so happy while hiding from him the fact that she was dating Ricky. She finally let him back into her life – he thought she forgave him but really she just accepted that he was going to betray her trust again and there was nothing that she could do about it – which made Gabriel extremely happy, but she was still keeping stuff from him. Sure the fact that she was keeping the specifics of what was going on in Cainsville from Ricky helped Gabriel accept their relationship, but that just goes to show that Olivia doesn’t really want to spend the rest of her life with Ricky.

Don’t get me wrong, Ricky seems like a great guy and he seems to be what Olivia needs at that moment. But I truly feel as if Gabriel is the end game. Olivia is going to figure out what her inherited memories are trying to tell her and she’s going to be the one to break the cycle – she’s going to choose Gabriel, her Gwynn, the Tylwyth Teg. She’s going to end up with the person that she was meant to be with, to ignore the call of the Hunt and live in eternal day.

Mallt-y-Dydd and Mallt-y-Nos, two sides to the same coin. And Olivia has inherited this struggle.

Looking at the main mystery of the story, I feel kind of bad for Macy – though exceptionally bad for Ciara. Macy was driven mad by her heritage, feeling like she was ripped off by being given to the humans living in squalor. While this shouldn’t have resulted in Ciara’s death – or her beheading and use to terrify Olivia – it makes sense that Macy would try to go to extremes in order to get to the part of her life that she felt she belonged. She just went about it the worst way possible. Taking her own life rather than going to jail because of murder and attempted murder makes sense in a way, but I do feel sad that she was so mentally unstable that she felt that was her only way out of the situation.

I’m glad that Gabriel was able to protect Olivia from Macy – and Tristan through their association – though I wish he’d protect her without getting hurt himself. How many injuries is he going to have to sustain protecting her?

Going back to the mysterious events in Cainsville, it’s got to be hard for Olivia pulling herself away from the one place she felt safe since everything hit the fan. Sure Ida and the other elders have handled things poorly – and Patrick was a dick to leave Gabriel alone after siring him – but Cainsville still made Olivia feel safe. She’d finally started to being a real adult there. And now she felt as if she couldn’t because she was existing under the thumb of the very people she was investigating.

Thankfully Gabriel was able to get over his fears and allow Olivia to come over to his apartment, once again being her saviour. It took their relationship – the non-romantic one they have since Gabriel isn’t ready to let them have anything more than that – to the next level. Sure it’s probably only until Ricky gets back to town, but it was a huge things for Gabriel to do – and Olivia knew it.

Finally, I can’t wait to see the aftermath of Olivia’s dad’s letter. Todd Larsen was the perfect father to her when she was a babe and to read his letter assuming that she didn’t want to meet him was heartbreaking. He had no idea how much effort Olivia was going through in order to try and see him, he was just worried that she felt dealing with Pamela would be easier for her. His letter was an extremely mature way to say that he still loved her and wanted to be in her life however she’d let him, and I think that was a weight off of Olivia’s shoulders. She had to have wondered if part of the reason she wasn’t able to see Todd yet was because he secretly didn’t want to see her. Now she knows that her father still loves her.

Other reviews from this series:

5 thoughts on “Visions by Kelley Armstrong”