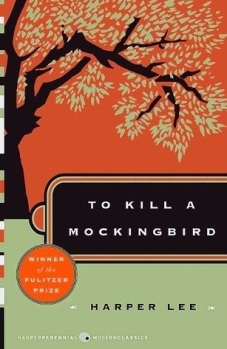 Series: To Kill a Mockingbird, Book 1

I have to admit, I went into this book with pretty high expectations. After all, if almost everyone I know has to read this book for school regardless of what level you’re taking (Academic or Applied, University or College streams) then there has to be a reason. Since this book is supposed to be amazing – and is one of my best friend’s top books of all time – I needed this book to blow me away.

I’m here to tell you that it did.

Now, I’m not a huge fan of songs that are titled off a line that’s said maybe once during it. (I know this sounds like it’s coming from left field, but bare with me.) After all, a song’s title should reflect the song as a whole or have a special meaning. Otherwise, the title just sort of falls flat to me. As a book lover more than a music lover, I find this even more true with books. A book’s title has to mean something, it can’t just be a throwaway moment from the story, unforgettable and ultimately not a true symbol for the book. To Kill a Mockingbird definitely did not have this problem.

Heck, when Atticus explains that to kill a mockingbird was a sin and explained why he thought so, my mouth literally popped open in shock. Little did I know that the importance of this line wouldn’t make itself known until much later in the book – almost the very end. You see, there’s many things that can be considered sins. But the biggest one might just be killing something innocent, that’s done you no harm, the way killing an innocent mockingbird would be.

On top of this amazing symbolism, Lee did a fantastic job dealing with touchy issues such as rape and racial disparity. While racial issues were rampant at the time and I would love to say that we don’t deal with that anymore, I have to admit that in 2019 racial disparities are still as prevalent as ever. Sure, you might be able to trick yourself into not seeing it happen around you. And, sure, people have gotten better at hiding their bigotry. But this doesn’t mean that it isn’t still a rampant issue worldwide. I have to admit, I teared up a couple of times reading how unfair people can be. To be frank, it’s disgusting that these issues ever happened, let alone continue to happen today.

Lee deals with these issues in a way that I’d love to call beautiful… but can’t because it’s such an ugly issue. That being said, Lee shows in an almost effortless way how prejudice and bigotry are taught. You’re not born hating a specific group of people or a way of life.

If you’re like me and never had to read this book for school, I highly recommend you pick it up. Even if you’re not a fan of “classics”, this is a book I truly believe everyone should read. Not only is it award winning and well written, it’s one of the most impactful things I’ve read in a long time. I can’t believe I went 23 years without picking this beauty up.

Also, never underestimate the power of innocent and blind trust. Children have the power to change the world.

Atticus was right. One time he said you never really know a man until you stand in his shoes and walk around in them. (Scout’s musings, Ch. 31, p. 321).

I have to admit, after I finished this read a did a little bit of research into To Kill a Mockingbird. I felt the need to, not only for a better understanding of the story but also to get a full grasp on why it’s taught in schools til this day. My one regret of taking Grade 11 English in summer school might just be the fact that I didn’t get to read this amazing book with my peers and get their thoughts and opinions on the book back then.

So, what did my research turn up?

I can hardly believe that Harper Lee wanted this tale to simply be a love story. She didn’t expect people to flock to it the way it did or for it to win any awards. Her belief that people should write what they know and do it well is so apparent in this book that it’s no surprise that it’s won so many awards.

On top of this, the main message being the coexistence of good and evil is at the forefront of the story. It’s not a hidden meaning that the reader has to tease out or go looking for. Heck, Jem and Scout have conversations about this topic throughout the novel. After all, how could you in good conscious convict a man you know is innocent just because of the colour of his skin and then go about your day like you did nothing wrong? If everyone is supposed to be equal in the eyes of the law, why is it that Tom Robinson was sentenced to death while Bob Ewell – the white man that actually beat up his daughter for kissing Tom – got away scot-free.

Scout and Jem’s childhood bewilderment at adult behaviour is a perfect lens through which to view the events of this book. As Dophus Raymond says, sometimes only children are the ones who understand. They’ve yet to be corrupted by the views of others or societal expectations. They’re still able to form their own thoughts and opinions without outside interference.

The fact that Atticus raised his children knowing that what society was doing was wrong and it’s okay to question things just goes to show how important a moral education really is. You’re not going to see any of the Ewell children saying that it’s wrong to convict an innocent man just because of the colour of his skin.

Heck, Scout confronting the group of men in front of the jail “talking” to Atticus goes to show how childhood innocence and a strong moral code can make a real difference. Sure, Scout didn’t realize that she was defusing the tension – children don’t always realize that their actions have consequences – but this doesn’t negate the impact her words and actions had in this moment. By just talking to the men Scout was able to remind them that Atticus and Tom were real people. They weren’t boogeymen trying to scare them and ruin their lives.

As the book went on, I felt the way Scout did about Arthur “Boo” Radley. I can understand why he chose to stay inside his house all the time. I wouldn’t want to go out and deal with a town full of bigotry and racism either. Just because a white man loves a black woman and they have mixed children doesn’t mean that their way of life is any lesser than yours. Just because you don’t follow the exact same religious rhetorics doesn’t mean that you’re any less of a person.

Boo knew who he was and what he wasn’t was was an active member in Maycomb society. That’s not to say he was lesser the way many in town felt, just different. As Scout goes on to explain in the end of the story, Boo experienced the world from the comfort of his own home because he chose to. He got to experience “his kids” as they grew and learned. Sure, he snuck Jem and Scout the odd present without them knowing they were coming from him. And, yes, he comforted Scout by placing a blanket around her shoulders when she was shocked watching Miss Maudie’s house burn down. But even still, Boo only emerged when “his kids” needed him.

Boo, according to Miss Maudie, was a sweet boy whose tyrannical family all but ruined him. He was just one example of many throughout this story of the destruction of innocent. Him saving Jem and Scout’s lives just goes to show that, though they tried, his family was never able to break the innocence that could be found in Boo. One innocent life – Boo, an adult when most adults had long since lost their innocence – was able to protect the innocence of both Jem and Scout.

Heck Tate is one of the few citizens of Maycomb that understand Boo’s innocent ways. He knows that Boo protected Jem and Scout from Bob Ewell’s attempt to kill them and makes it clear to Atticus that no one in town will hear of it. Boo deserves to live in peace the way he wants, not to have people bothering him with their praise – no matter how deserved it is. Scout, proving that she’s smarter than most people give her credit for – shows Atticus that it’s alright to keep things hushed up from the town. After all, to kill a mockingbird is a sin.

While I know that my “review” of this book can read as more a summary of the book’s events than a proper review, I have to admit that I don’t have much else to say about the story. Lee did a fantastic job at tearing apart the social intricacies and inequalities that ran rampant in her day. The fact that these inequalities continue to run rampant in the world today shows how important books like To Kill a Mockingbird really are.

Boo Radley and Scout might very well be my favourite pair of characters in any book. Their innocence and moral strength is a testament to how a person’s character really does shape the world around them. While both live drastically different lives – Scout an outgoing child and Boo a reclusive adult – the way they interact with the world is eye opening. I wish more people in the world could be as honest and forthcoming as these two were.

To Kill a Mockingbird has officially become my favourite classic of all time.

2 thoughts on “To Kill a Mockingbird by Harper Lee”